Journal of Dentistry And Oral Implants

Journal of Dentistry and Oral Implants

Current Issue Volume No: 2 Issue No: 4

2Department of Integrated Procedures, University of The State of Rio de, Janeiro, Brazil

Occlusal contacts are proprioceptors which direct the movement of the mandible to the maxilla. They are sensitive to touch 1. It is important to measure occlusal contact in order to assess an occlusion. Grinding, clenching and wear can be assessed by studying the occlusal contact recordings. The size of a contact is synonomous with surface movement. Wear may be assessed with intensity of contact. Intensity varies with the occlusion and tooth movement. Clenching is assessed with intensity measurements. With implants the mechano transduction of occlusal force may be detrimental because there is no periodontium to mitigate potential trauma to the underlying bony scaffold. Implants are fixed in their boney housing 2. Measuring contact intensity and surface area may provide a means to assess a dentition mixed with natural and implant supported restorations. Light and heavy occlusal contact areas can be adjusted to complement an existing occlusion. Measurements in millimeters can be recorded for further comparison however a description of an ideal occlusal contact is unknown.

It is assumed that implant restorations rely on the surrounding bone and temporo-mandibular joint for proprioception. Implants are immoveable; teeth move 5. Occlusal contact indicators do not record movement, they record a fixed position. Neural paths control occlusal patterns. Bruxism 3 and clenching 4 are caused by neural aberrations that are manifest in occlusal contact, intensity, and mandibular movement. Occlusal contact aberrations present clinical issues practitioners face. Such issues include contact intensity and contact expansion. Occlusal imbalance may add or subtract from periodontal health and implant stability 6. Implants do not possess a periodontal housing which means that vertical forces are sustainable but horizontal forces can damage implant stability 7. Minor tooth movement vertically and horizontally is required to sustain a healthy periodontium. Mixed dentitions with teeth and implants cannot work in occlusal harmony because of the uneven tooth and implant contact intensities 6. Infra occlusion which is not recorded results in no occlusal contact or tooth support. Normal tooth support for the dentition is altered. Comparisons of occlusal records over time are not made. Clinicians continue to confront occlusal aberrations that are not clinically visible. They cannot record occlusal contact intensity. Ultimately it is the functioning occlusal contact that determines occlusal/oral health 7, 8.

This observational study compares four clinically used methods for recording occlusal contacts. Recordings were made using each of four different methods on the same subject who volunteered participation. All recordings were made in office by one clinician (CS) during the same time period. A clinical subject with few restorations was selected and the subject agreed to the procedure along with the right to publish the results. There are no quantitative measurements. Ankylosis is a factor that was not addressed. The recording indicator systems evaluated were: 1. Accufilm (Parkell, Brentwood NY. USA). 2. Blue paper (Bausch, Nashua NH. USA), 3. Primescan (Densply/Serona, Waltham MA. USA), 4. PMscan (Mco, Boston MA. USA). In all procedures the subject was advised on how to close and the procedure was repeated. The subject made one hard closure into or onto the marking surface and the results were recorded and are displayed in (Figure 1) (Figure 2, Figure 3, Figure 4 ) 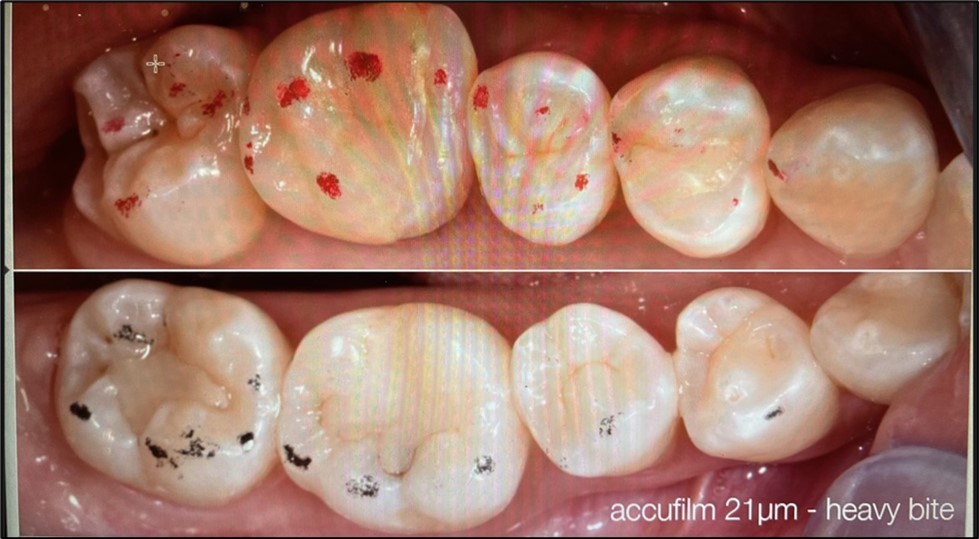 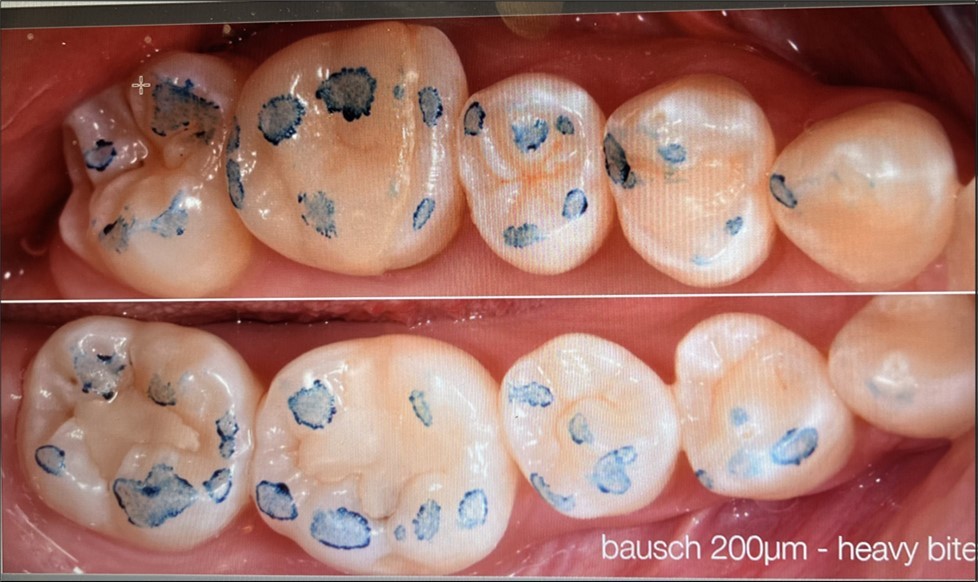 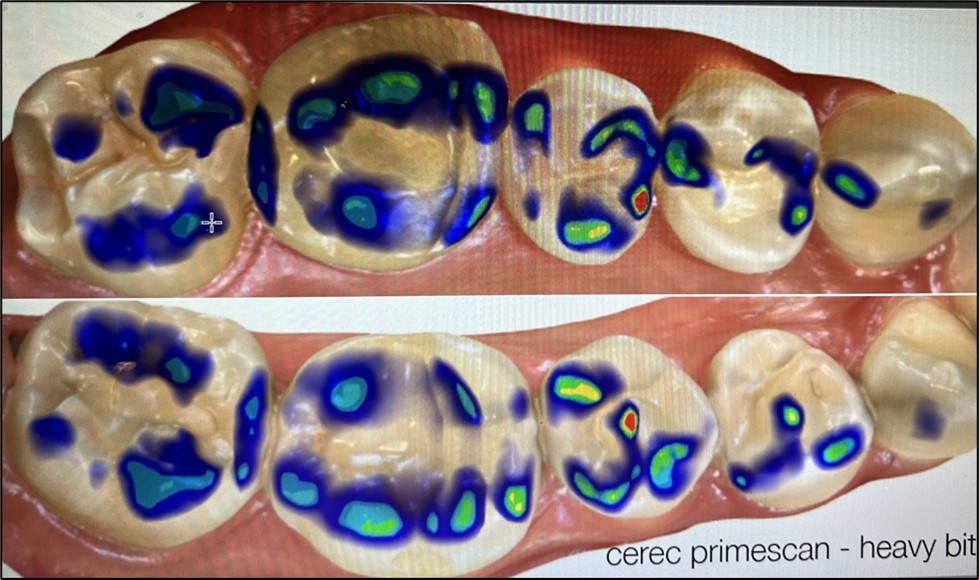 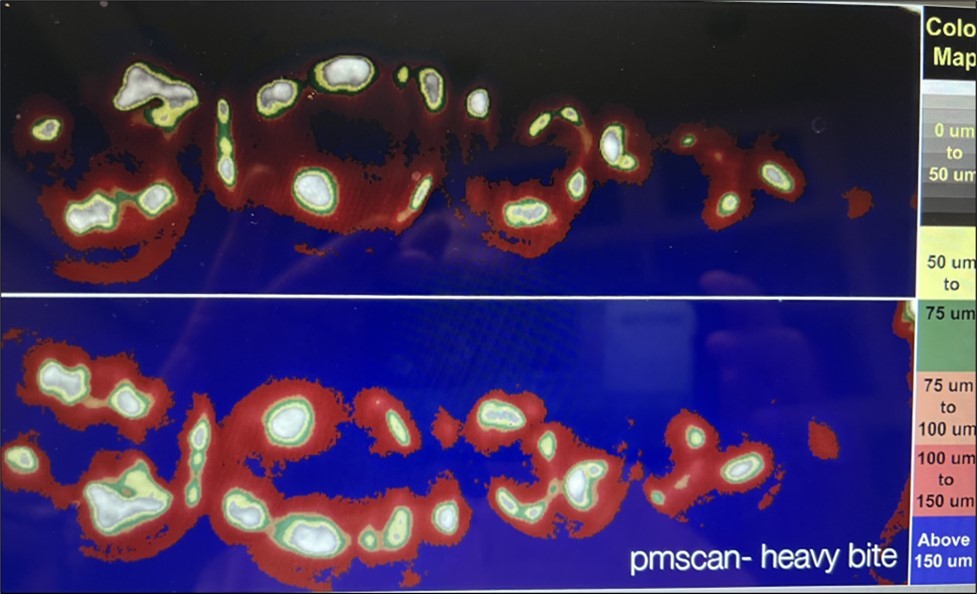 Material 1: Articulating film {Figure 1} is thin (20 microns) and records high points. Variations in markings occurred. Intensity could not be measured. Records could not be stored.

Material 2: Blue marking paper {Figure 2} is thick (200 microns) and records high points. Variations in markings occurred. Biting light missed some markings and biting hard made too many. Intensity could not be measured. Records could not be stored.

Material 3: Primescan {Figure 3} recorded the occlusion digitally. Bites may vary because they are recorded digitally. Intensity of closure and parametric movements are not recorded.

Material 4: PMscan {Figure 4} records the occlusion in a non-set translucent silicone impression material which is loaded into a triple tray impression carrier. Intensity and movement for full arch can also be recorded and measured in millimeters. Records can be stored. The recording is instant. It is developed digitally with PMscan 2 which is comprised of a closed light box, a digital camera, an image analyzer (Image J) and a processor 11. Total time for recording and processing is one minute.

At present there are few measurement systems that record the occlusion and store the information. T Scan (Boston,MA.USA) records occlusal force but does not record occlusal contact or intensity. The effort to align force with contact is unknown. OcclusSence Guide for Digital Occlusion (Bausch: Nashua, NH.USA) also records force along with area. Surface area is dictated by the indicator markings. It does not include intensity and parametric movement.

All materials and systems differ as do the recordings. Bite intensity is difficult to record except with the PMscan which also records infra occlusion 10. The figures suggest that intensity is important in aligning implant restorations and in monitoring bruxism and clenching pathologies 11. Paper and film do not record intensity and their markings are not permanent. Primescan requires a CAD system and does not record intensity or movement. PMscan records intensity and movement. The relation of occlusal contact to touch is unknown. What is evident is that the older systems may not fit present needs. New restorative procedures, techniques and repair systems require monitoring systems that fit the demands of today. Contact, intensity and permanent multidimensional recording systems are essential. The understanding of occlusion remains elusive.

This is an observational study. All marking materials and measuring systems shown in this study are in clinical use. None comes with working directions. As a preliminary observational study, the findings are not generalizable but suggest directions for future study with experimental control and a larger sample. The development of an occlusal contact standard and measurement system which includes variables such as intensity along with clinical instructions for indicator application is suggested.