Current Issue Volume No: 1 Issue No: 3

Intestinal parasitic infections, especially intestinal protozoan parasites remain significant public health problem in Senegal. Several studies have demonstrated the endemicity of the diseases. The study was carried out with the objective of assessing the epidemiolocal profile of intestinal protozoan infection diagnosed among patients attending to Fann University Hospital in Dakar, Senegal.

A retrospective study was conducted from 2016 to 2020. Samples were collected from patients attending to the laboratory for parasitological confirmation. Fresh stool samples were observed using direct examination, formal-ether concentration method and modified Zeilh Nielsen staining method. Descriptive analysis was performed using Stata MP 16 software. The significance level was set at 5%.

Among 3825 patients selected in the study, 1009 were found with at least one intestinal protozoan parasite representing an overall prevalence of 26.4% (CI 95% (24.7– 28)). Mono-parasitic and di-parasitic infection represent 81.6% and 18.2% respectively while polyparasitism was observed in 26 patients representing 2,6%. Among positive samples, 16 (8.7%) were associated with helminths. Blastocystis sp. (40.8%), Entamoeba Coli (38.2%), Endolimax nana (8.2%) and Giardia intestinalis (8.1%) were mainly observed. Trophozoites Entamoeba histolytica was observed with 2.3%. Frequency of intestinal protozoa was higher in the 15 – 30 age group (28.3%) and in male group (26.9%). The parasite carriage was most important during the wet season comparing the dry season (p = 0.65). Asymptomatic patients (29.5%) were more infected than symptomatic patients (23.5%) (p <10-3). The main clinical symptoms were diarrhea, abdominal pain, dysenteric syndrome, fever, dyspeptic disorders, and vomiting.

These results showed that intestinal protozoan infections remain prevalent in Senegal with a high proportion of asymptomatic who constitute an important reservoir of parasites. Effective control strategies such as water supply, hands washing, and mass deworming campaign could reduce the prevalence of these diseases.

Intestinal parasitic infections (IPIs) are a worldwide public health problem, especially in resources limited countries. Globally, about 3.5 billion people are affected by parasitic infections. The annual morbidities and mortalities due to IPIs are estimated to be over 450 million and 200,000, respectively 1, 2, 3. According to World Health Organization (WHO), children living in endemic are most affected with an estimated number of 270 million preschool children and over 600 million school children 4. This endemicity could be explained by a high population density and low environmental and socio-economic conditions such as poor hygiene conditions, low access to improved water sources, lack of standard sanitary facilities and limited economic resources 5, 6. Morbidity and indirect effects of IPIs have a substantial impact on health and quality of life 4. Two groups of parasites can colonize the digestive tract, protozoa, and helminths. Their pathogenicity is variable from asymptomatic carriage to severe morbidity cases depending on the intensity of the infection 7. Symptoms such as diarrhea, dysentery, vomiting, and anorexia are often observed. Diarrhea, including that of parasitic origin, is among the most common illnesses which cause infant and childhood mortality in developing countries 8, 9. IPIs can also be responsible of anemia, stunting, underweight, physical weakness, and low educational performance in schoolchildren 10, 11.

According to WHO, 10% of the world's population is infected by Entamoeba parasites. Infection with Entamoeba histolytica is the third leading cause of mortalitý by parasitic diseases in the world after malaria and bilharzia. It affects approximately 50 million people, of whom 40,000 to 110,000 each deaths year15. Giardia intestinalis infection is one of the most digestive flagelloses both in terms of frequency and pathogenicity with an estimated number of 280 million cases mainly located in Asia, Africa, and Latin America 16. Other protozoan infections such as Blastocystis sp. are gaining interest with prevalence becoming increasingly high 17

A retrospective and descriptive analysis was carried out from January 2016 to December 2020 in the Laboratory of Parasitology-Mycology of Fann University Hospital, which is a public referral hospital, located in the capital city of Dakar. All patients attending to the laboratory for a parasitological examination of stool samples, were included in this study.

Sociodemographic, clinical, and biological data from patients were collected using the laboratory records. The following variables were collected: age, sex, year of sample collection, season, clinical indication, macroscopic aspect of sample and parasitological results. Age was defined in 4 categories: less than 15 years, 15 - 30 years, 30 - 45 years, and more than 45 years. The season was defined in both the dry season (October to June) and rainy season (July to September).

After data collection, data were entered in Excel software and the analysis was performed using Stata software version MP 16 software. Quantitative variables were described in terms of means, standard deviation. Inter group comparisons were performed using ANNOVA test or Student t test after checking the conditions of application of these tests. When these tests were not applicable, the non-parametric tests (Man Withney, Kruskall Wallis) were used. For descriptive data, percentage with confidence interval (CI) was used to assess the prevalence of each outcome. Proportions were compared using chi-square test or the Fisher exact test (univariate analysis). The significance level of the different tests was 0.05 two-sided.

This study was conducted according to the Declaration of Helsinki and existing national legal and regulatory requirements. To respect the confidentiality, an identification code was given to each participant. Data are routinely collected from patients who attended to hospital for biomedical testing. Just a permission to used data for publication was requested from the administration of Fann University Hospital which a National Reference Hospital.

Overall, 3285 patients with completed data were enrolled in the analysis. The age of the patients ranged from 5 to 93 years with an average of 26.2±20.6 years. Study population was mainly represented by subject under 15 years old (41.5%) followed by subjects in the age category 15-30 years with 22.3%. The study population was predominantly male (50.8%). The sex ratio was 1.03. Stratifying on the season, 76.3% of the sample of our study was collected during the dry season against 23.7% during the wet season (Table 1).

Prevalence of Intestinal Potozoan Infection According to Study Participant Characteristics

Figure 1. Prevalence of Intestinal Protozoa Infection according to the year of sample collection 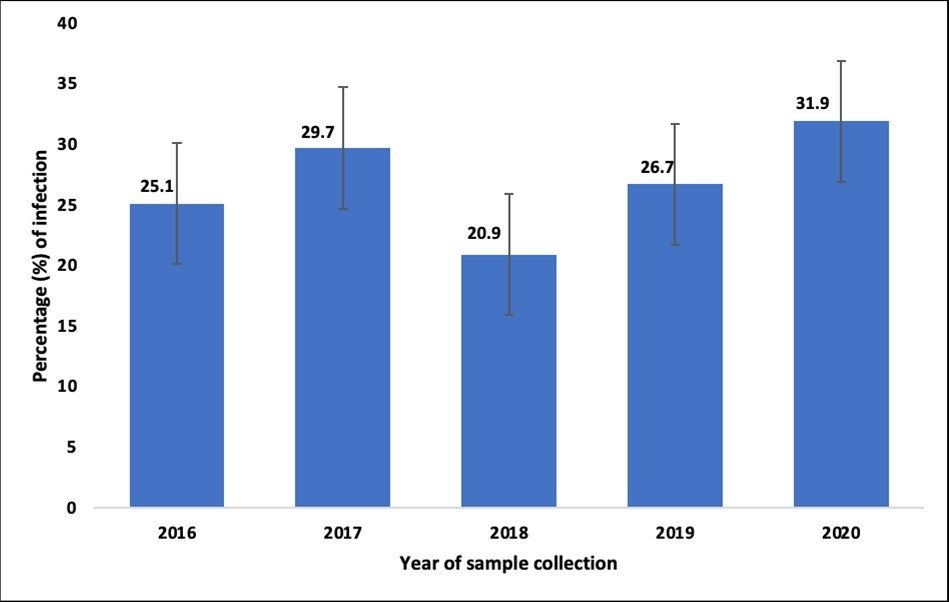 According to age category, intestinal protozoa carriage was more important in patients aged 15 - 30 years with 28.3%. The prevalence in subject under 15 years old was 25.9%. The difference between the age group was not significative (p=0.52). Intestinal protozoa prevalence was higher among male participants (29.9%) compared to female participants (25.7%) (p=0.57). During the rainy season, patients were more infected (26.9%) compared to dry season where the frequency of intestinal protozoan infection lower with no significant difference (p=0.65). According to symptoms, the prevalence was more important in asymptomatic subjects (29.5%) compared to symptomatic ones (23.5%) (Table 5).

Table 5. Prevalence of intestinal protozoan infection according to characteristics of study participant (N=1009)

Figure 2. Prevalence of Intestinal Protozoa Infection according to the clinical symptom

Table 6. Intestinal protozoan carriage according to the aspect of stool samples and the presence of cellular elements in stool samples

Intestinal parasitic infections are major cause of morbidity and mortality worldwide especially in developing countries. With the implementation of mass deworming campaign with Mebendazole/Albendazole, there is a rarefaction of helminths and a persistence of intestinal protozoa.

The results from this study showed that intestinal protozoa carriage was more important in patients aged 15 - 30 years with a percentage of 28.3%. The prevalence in subject under 15 years old was 25.9%. The lower frequency observed in the 0-15 years category (25.9%) is probably the result of the action of the Ministry of Health which since 2006 has implemented regular systematic deworming campaigns with Mebendazole/Albendazole in children in all health districts of Senegal.

Regarding the season, the results from our study showed that intestinal protozoa carriage was is more frequent during the rainy season (26.9%). This situation could be explained by a degradation of hygiene conditions observed during the period. Similar results were obtained by Sylla et al with a higher frequency in rainy season (27.27%) than in the dry season 26.5% 12.

Therefore, our results point out that in developing countries intestinal parasitic infection is still endemic despite the implementation of mass deworming campaign in children and other age groups. Intestinal protozoa parasites are frequent with a predominance of non or low pathogenic forms.

The study showed that intestinal protozoan infection is a public health concern in health facilities in Senegal. Adults and male subjects are more infected. In the rainy season which is associated with degradation of socio-environmental factors, the prevalence intestinal protozoan infection is high. Therefore, there is a need to improve access to safe water, quality of sanitary facilities and also to sensitize populations on the respect of hands washing in order to limit the spread of parasites. Additional studies should be conducted with advanced microscopic and molecular techniques that can be helpful for a better diagnosis of intestinal parasites and to update the epidemiology of the disease in order to take appropriate prevention and control measures.

This study was not funded. Funding for data collection was covered by the Laboratory of Parasitology-Mycology, of Fann teaching Hospital.

We would like to acknowledge the entire study participant and the staff of the laboratory of parasitology at Fann Teaching Hospital.

KS conceived and designed the study. KS supervised the data collection. KS analyzed the data and wrote the first draft of the manuscript. All authors read and approved the final manuscript.

Availability of Data and Material

The data used for this research article are available from the corresponding author upon request.